I’m in Ur Toastmasters Meeting, Giving U Speeches 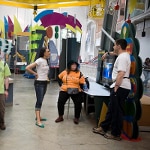 Here’s how I celebrated Autism Acceptance Month:  I gave my debut speech in Toastmasters about me and my neuro-orientation, to a roomful of nonautistic folks.  And they dug it.  Or at least, quite a few people said they did, and nobody acted (in body language I could read) like they didn’t.  That’s good enough for me.

In case you’re unfamiliar with Toastmasters, they’ve been around since 1924, and they have over 13,000 chapters worldwide, each with its own focus.  Some are open general interest meetings, some have a particular theme (my group is “Portland Progressives,” otherwise known as crunchy-granola types), and some are closed to anyone other than members of the company holding that meeting.  Their focus is helping people develop confidence and experience as public speakers, and it’s done in a way that’s supportive and constructive.  Ripping people to shreds and telling people they’re doing it “wrong” is not in their vocabulary.  And you can always audit – i.e. drop in and listen on any meeting that’s open to the public, if you want to get an idea of how it works before you join.

At the same time, they have very clearly delineated methodology; meetings are tightly constructed and move along quickly, and they give you specific instructions about how long each speech should be and what the focus should be, and they even have a timer with colored cards to let you know when you’re at your minimum time, halfway to your maximum time, and at your maximum time.  I appreciate this very much; there’s no guesswork involved, they let you know exactly what they want from you, and what they’d like you to work on.  I let them know early on about my auditory processing issue, that I would like to have questions for Table Topics (a feature where people speak for a minute or so off the cuff on a particular topic) posed to me in writing if I ask for it, and also that I have hyperacusis, which means I have ears like a cat and can be distracted and even distressed by certain kinds of noise.  They’ve been very kind and understanding, although perhaps this goes with the territory of being crunchy people (in terms of lifestyle and politics, not skin texture).

The first speech any Toastmaster gives is called the “ice breaker,” and you have 4 to 6 minutes to say, “This is me.”  In other words, we’re all self-narrating zoo exhibits on our first speech!  My speech was called “How Can an Autistic Person Give a Speech?”, and it let them know that, in essence, people like me were all around them, and always have been.  We’re moving through Toastmasters meetings and college classes and offices and stores and life just like they are, we just do it a little differently.  I got very nice feedback on what I said, and what constructive advice I did get had mostly to do with not making it obvious that I was flipping index cards, and not to do the “teapot stance” – i.e. put one hand on my hip while gesturing with the other.  (Since I usually do speaking gigs at a microphone, it’s usually not an issue, but it’s a good thing to keep track of, anyway.)  Apparently, almost everyone has weird stuff they instinctively do with their hands; one woman at the meeting said she had “disco hands” (waving them in front of her face while she talked).

I have only had a diagnosis for 4-1/2 years; before that, I went to public places like Toastmasters feeling horribly self-conscious, like I was going to be “found out,” even though I didn’t even have a name for what I was yet.  They’re going to find out I’m a freak.  Look at that thing I’m doing with my hands.  That look.  That what-are-you-doing-hear-freak look.  There it is.  Again.  Now it’s different.  If I stim during the meeting, I stim; if I rock, or twist my hands, or nod my head side to side, they aren’t going to be shocked, or even particularly disturbed, as long as I don’t bump into people (and I can manage not to do that).  I can even get away with the eye contact thing, because I covered that in my speech (I look at noses when eyeballs are too much information to process).  It’s all very liberating.

Part of Autism Acceptance involves accepting myself, even if others don’t.  That’s always been the hardest thing for me to do, to say, “It’s none of my business if people don’t like me, as long as I’m not being abusive to them.” To say, “I belong here, because I say so.”  I didn’t think I could do public speaking for the longest time, because I thought I had to look and sound like nonautistic people who were doing it; I didn’t know I could do it “autistic style,” until I found myself actually being asked to do it!  But I went to Toastmasters because I’m now in multiple positions (Portland Chapter Lead for ASAN, sole self-advocate member of the Oregon State Commission on Autism Spectrum Disorders) which require me to get up in public and speak on behalf of myself and other autistic people, and I wanted to be the best me I could be, which is an autistic me.  I have a right to be there.  And so do you, wherever it is you want to be.