Autistic Self Advocates and Allies Campaign for Electric Shock Ban 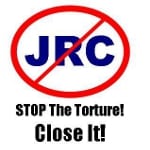 Wednesday, June 20, Autistic self-advocates Kevin Barrett and Shain Neumeier went to the Massachusetts State House with fellow aversives opponents Cheryl McCollins and Gregory Miller in order to convey ASAN’s support for Massachusetts Senate Budget Amendment #548, which would impose a statewide ban on the use of aversives on people with disabilities.  The two ASAN representatives brought a letter arguing in favor of the amendment, which they provided copies of to the members of the legislative conference committee that will decide on whether the amendment continues forward in the budget approval process.  This letter was cosigned by statewide, national and worldwide disability rights organizations including the Disability Law Center of Massachusetts and Disability Rights International, which oppose aversive use such as that practiced at the Judge Rotenberg Center, which is at this point the only program in Massachusetts and in fact the world to use contingent electric shock.  Along with Miller and McCollins, they also presented the members of the conference committee with over 260,000 signatures obtained from two online petitions calling for an end to the use of contingent electric shock, over 8,000 of which were from Massachusetts residents.

Miller and McCollins, respectively a former JRC teacher’s aide and the mother of former JRC student Andre McCollins who recently received a settlement in a lawsuit against JRC for its use of shock, brought their own material on the JRC to present to legislators and the media.  Specifically, they gave the most complete picture of what had happened to Andre on the day he was shocked 31 times while being physically and mechanically restrained after he refused to take off his coat.  McCollins showed State House staff and news anchors a picture of the burns and scabs on her son’s leg that had resulted from him being shocked there numerous times.  Miller played clips from the now-infamous video footage of Andre’s being shocked for the members of legislative staff who hadn’t seen it yet.

They also presented the conference committee members’ offices with information that had not been released before – copies of Andre’s behavioral recording sheets from that day.  Miller highlighted how the recording sheets indicated, contrary to what JRC representatives have said at and since the trial, that the first “major behavior” that Andre had engaged in that day was not aggression against staff, but was instead the refusal to take off his coat, listed on the sheet as “blatant no.”  Miller and McCollins further pointed out how the JRC’s own documentation showed that he had been shocked nine times for screaming out in pain and for help, and nineteen for tensing up his muscles in order to brace himself from the pain of the shocks he kept receiving – making the vast majority of the shocks responses to his showing signs of pain and fear, which JRC staff labeled as “health-dangerous behaviors.”  Only one of the shocks was listed as being for aggression, which was evidently not in the form of kicking, hitting, scratching or any of the other categories explicitly listed but not circled on the recording sheet, and was not otherwise defined.  One shock was left yet unaccounted for by JRC’s documentation.

At a press conference outside the State House before the four went in to talk to members of legislative staff, a number of people with disabilities and their allies came out to show support for their efforts.  This included members of the local Committee for the Legal Rights of Persons with Disabilities, such as the Disability Law Center’s Executive Director Alan Kerzin and long-term anti-JRC advocate Polyxane Cobb.  In front of this crowd, Miller and Greg publically challenged members of the legislature who have been reluctant to ban the shocks to try being shocked themselves with one of JRC’s homemade devices in order to make a truly informed decision.  And not just any of the shock devices, either – Miller specified that they should try the program’s most powerful machine, the Graduated Electronic Decelerator 4, which most of the current students are on, rather than the comparatively weak original version of the GED that visitors and skeptics have allowed to test out in the past.  Neumeier added that they should further try the machine under the conditions that they are used in on actual JRC students, without immediate advance warning, and with the awareness that they, unlike the students, were able to refuse the shock if they so chose.  The press conference ended with McCollins showing the press the photograph of Andre’s injuries after his own experiences with the shocks.

The four advocates visited all six of the conference committees’ offices, as well as those of Speaker of the House Robert DeLeo, who has publically opposed restrictions on JRC’s use of aversives, and staunch aversives opponent Senator Brian Joyce, who sponsored the current budget amendment and its less restrictive version.  While they were unable to talk to any of the actual legislators, they provided information and documents to staff at all eight offices.  McCollins told them about how she had placed Andre at the program under the belief that their camera monitoring system would keep him safe from abuse, only to be horrified and outraged when she found her son shackled in restraints, catatonic, and lucky to be alive three days after his ordeal.  She called JRC a cult, and reiterated that its methods were torture, challenging JRC or its supporters to show her an example of a student there who honestly wanted to be shocked.  Miller told them about what he observed while working at JRC, including how students in restraint positions like Andre had been in would tense their muscles in fear of shocks so much that they lost the ability to tense up anymore, leaving them wholly defenseless against the pain.  By punishing them for doing this, he said, JRC was essentially forcing them to fight their own bodies and survival instincts.  He also provided examples of other things he and other staff members had been required to do as a JRC employee, including shocking students while restraining them and, often violently, simulating their dangerous behaviors as part of what the program calls “behavior rehearsal lessons,” which he compared to something out of A Clockwork Orange.  Meanwhile, the two ASAN representatives provided legislative staff and news cameras that followed them with information from secondary sources such as state investigations and JRC’s own literature about the misuse of aversives.

In talking to people at the State House, it was inevitable that Representative Jeffrey Sanchez’s nephew Brandon, who has been attending JRC since before it started using contingent electric shock as an aversive and who has been on the shock devices for over 20 years, would come up.  Miller told legislative aides that he had actually worked extensively with Brandon while at JRC, and that his behavior was completely unchanged by the use of contingent electric shock.  In particular, he talked about five or six weeks periods where Brandon would be put on what JRC called “GED vacations” so his skin could heal from all scabs and minor burns caused by the shocks, and how he was his behavior was neither better nor worse during these periods.  When he asked his supervisors why Brandon was still receiving shocks, Miller was told that it was for “political reasons” – if Brandon was thought to no longer need the shocks, JRC would lose its support from the state legislature. Miller also addressed comments made by Brandon’s father, Representative Sanchez’s brother, at legislative hearings over past attempts to ban aversives, to the effect that he “would rather blow [Brandon’s] brains out” rather than see him go off the shock device.  “Before you kill him,” he told legislative aides, with the intention of these words reaching the Sanchez family, “Send him to me.”

Of the six conference committee members, Senator Jennifer Flanagan is the only one committed to ending the shocks, with her staff informing the campaigners yesterday that she supports the ban.  Other legislative staff seemed more or less receptive of the message, though they themselves could not speak or decide on behalf of the representatives and senators themselves.  As for Speaker DeLeo, whose influence could impact the vote on the amendment if and when it comes before the entire House, his aide was willing to listen to the information in favor of the ban, but there is still worry that he may be unswayable in his support of JRC and its aversives.