2014 Joint Letter to the Sponsors of Autism Speaks 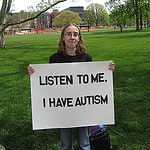 To the Sponsors, Donors, and Supporters of Autism Speaks:

We, the undersigned organizations representing the disability community, are writing to urge you to end your support for Autism Speaks. We profoundly appreciate your interest in supporting the autism and broader disability communities. Our work is about empowering and supporting people with all disabilities, including adults and children on the autism spectrum, to be recognized as equal citizens in our society and afforded all of the rights and opportunities that implies. Unfortunately, Autism Speaks’ statements and actions do damage to that work and to the lives of autistic people and those with other disabilities. It is our hope that we may work together in a spirit of partnership to find new and less controversial ways for you to show your commitment to our community.

Autism Speaks’ senior leadership fails to include a single autistic person. Unlike non-profits focused on intellectual disability, Down Syndrome, Cerebral Palsy and countless other disabilities, Autism Speaks systematically excludes autistic adults from its board of directors, leadership team and other positions of senior leadership. This exclusion has been the subject of numerous discussions with and eventually protests against Autism Speaks, yet the organization persists in its refusal to allow those it purports to serve into positions of meaningful authority within its ranks. The slogan of the disability rights movement has long been, “Nothing About Us, Without Us.” Almost nine years after its founding, Autism Speaks continues to refuse to abide by this basic tenet of the mainstream disability community.

Autism Speaks has a history of supporting dangerous fringe movements that threaten the lives and safety of both the autism community and the general public. The anti-vaccine sentiments of Autism Speaks’ founders have been well documented in the mainstream media. Several of Autism Speaks’ senior leaders have resigned or been fired after founders Bob and Suzanne Wright overruled Autism Speaks’ scientific leadership in order to advance the discredited idea that autism is the result of vaccinations. Furthermore, Autism Speaks has promoted the Judge Rotenberg Center, a Massachusetts facility under Department of Justice and FDA investigation for the use of painful electric shock against its students. The Judge Rotenberg Center’s methods have been deemed torture by the United Nations Special Rapporteur on Torture (p. 84) and are currently the subject of efforts by the Massachusetts state government and disability rights advocates to shut the facility down. Despite this, Autism Speaks has allowed the Judge Rotenberg Center to recruit new admissions from families seeking resources at their fundraising walks. We believe this is not the type of action you anticipated when you agreed to provide support to Autism Speaks events.

Autism Speaks’ fundraising efforts pull money away from local communities, returning very little funds for the critical investments in services and supports needed by autistic people and our families. Only 4% of funds donated to Autism Speaks are reinvested in services and supports for autistic people and our families. Across the country, local communities have complained that at a time when state budget cutbacks are making investment in local disability services all the more critical, Autism Speaks fundraisers take money away from needed services in their community.  In addition, while the majority of Autism Speaks’ funding goes towards research dollars, few of those dollars have gone to the areas of most concern to autistic people and our families–services and supports, particularly for autistics reaching adulthood and aging out of the school system. According to the Department of Health and Human Services’ Inter-Agency Autism Coordinating Committee, only 1% of Autism Speaks’ research budget goes towards research on service quality and less than one-quarter of 1% goes towards research on the needs of autistic adults.

Autism Speaks’ advertising depends on offensive and outdated rhetoric of fear and pity, presenting the lives of autistic people as tragic burdens on our families and society. In its advertising, Autism Speaks has compared being autistic to being kidnapped, dying of a natural disaster, having a fatal disease, and countless other inappropriate analogies. In one of its most prominent fundraising videos,  an Autism Speaks executive stated that she had considered placing her child in the car and driving off the George Washington Bridge, going on to say that she did not do so only because she had a normal child as well. Autism Speaks advertisements have cited inaccurate statistics on elevated divorce rates for parents of autistic children and many other falsehoods designed to present the lives of autistic children and adults as little more than tragedies.

Autism Speaks’ only advisory board member on the autism spectrum, John Elder Robison, announced his resignation from the organization this month in protest of the organization comparing autistic people to kidnapping victims and claiming that our families are not living, but merely existing, due to the horror of having autistic people in their lives. In his resignation letter, he discusses his four years spent attempting to reform the organization from the inside without success, stating, “Autism Speaks says it’s the advocacy group for people with autism and their families.  It’s not, despite having had many chances to become that voice.  Autism Speaks is the only major medical or mental health nonprofit whose legitimacy is constantly challenged by a large percentage of the people affected by the condition they target.”

The disability community recently celebrated the 50th anniversary of the Developmental Disabilities Assistance and Bill of Rights Act, legislation first signed into law by President John F. Kennedy in 1963. The law begins with the statement that, “disability is a natural part of the human experience that does not diminish the right of individuals with developmental disabilities to live independently, to exert control and choice over their own lives, and to fully participate in and contribute to their communities through full integration and inclusion in the economic, political, social, cultural, and educational mainstream of United States society.”

We believe that statement to be true. Over the past fifty years, the disability world has focused on making these aspirations into reality, and significant strides have been made. Unfortunately, the actions of Autism Speaks attempt to undo fifty years of hard-won progress and take us further away from a world in which the goals articulated in the DD act are fully realized. We applaud you for your interest in supporting the autism and developmental disability, yet firmly believe that your support would have a more positive impact were it invested elsewhere. As a result, we the undersigned members of the disability community stand together in urging you to end your support of Autism Speaks and re-allocate your donations to a recipient who can better represent the needs and desires of autistic people and our families.

We would be glad to arrange a meeting to discuss these issues in more detail. Please direct your response to Ari Ne’eman of the Autistic Self Advocacy Network at 202.596.1056 or by e-mail at aneeman@autisticadvocacy.org.