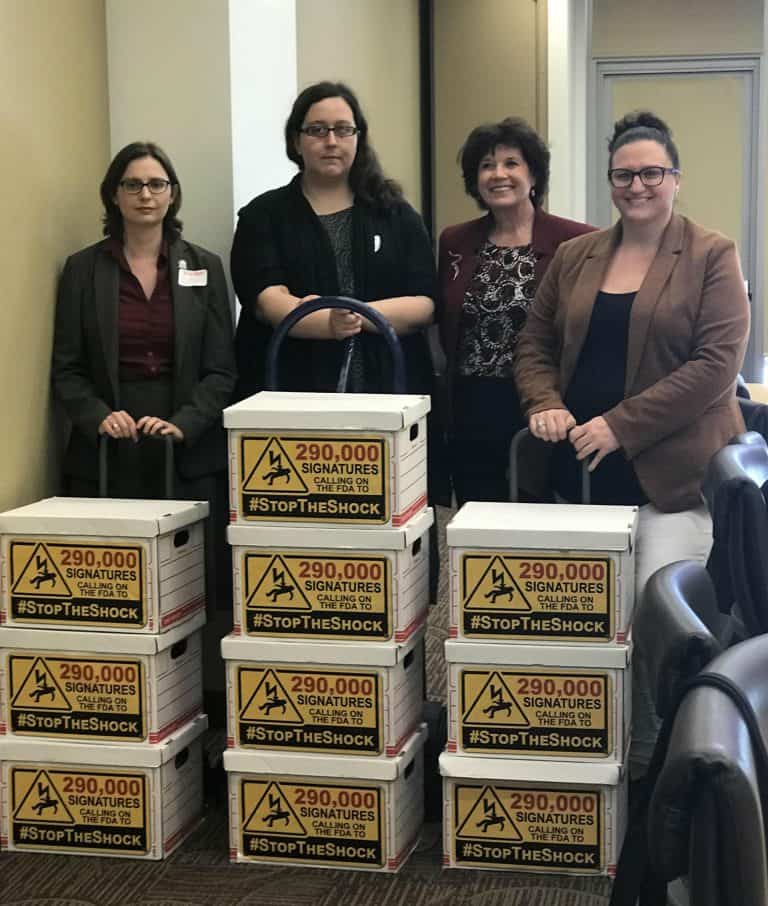 Today, the Food and Drug Administration released their final ban on the electric skin shock devices used to torture children and adults with disabilities at the Judge Rotenberg Center. The rule will go into effect in 30 days. The JRC will have 180 days to transition people currently subject to this torture off of the devices.

The Autistic Self Advocacy Network welcomes this ban, which will finally end decades of shock torture at the JRC. We are relieved beyond measure that soon our community members will no longer be punished with dangerous electric shocks for doing things like standing up without permission, making noises, or crying in pain. This ban is long overdue. During the six years that the ban sat at the FDA, people were terrorized, injured, and traumatized as the JRC continued to use electric shocks to punish and control them.

The FDA final ban was released after decades of work from advocates in every sector who brought the abuse to light, insisted that it was wrong, and fought to end it. Disability rights organizations, nationally and in every state, came together with an unprecedented level of consensus to oppose this torture. Self-advocates in Massachusetts and across the country made it their mission to stop the shocks. Provider and professional organizations stood up to their purported colleagues and worked to end the abuse of people with disabilities. Lawyers brought lawsuit after lawsuit against the JRC. Doctors provided expert testimony against the use of electric shock devices. Some people who were part of the harmful systems enabling the Judge Rotenberg Center — including regulators, policymakers in state government, and some of its former staff — reversed course, spoke out against the torture, and fought to end it. We are grateful to everyone who took a stand, and to the volunteers and grassroots organizers who joined ASAN’s advocacy campaigns and helped us hold the FDA accountable.

Above all, we are grateful to the survivors of the Judge Rotenberg Center. Without their advocacy, testimony, and the evidence they brought forward, publicly and privately, this regulation would not have been finalized. To the survivors, we say: what happened to you was wrong. It never should have happened. You did not deserve it. We are so sorry that you went through this. We are so sorry that it took us so long to stop it. You deserve so much better, and we will fight to make sure you have everything you need.

The release of the FDA ban is a landmark victory — and it is not enough. What happens next will be critical. The JRC will almost certainly sue to delay or prevent the ban’s implementation; we must stay in the fight, or risk ending up back where we started. And while the JRC will be forbidden from using electric shock devices, it is still allowed to use other forms of torture and abuse, including starving its residents, as a means of punishment and to control behavior. Nor is the JRC the only residential facility which tortures, injures, and kills people with disabilities. Their use of electric shocks may have been unique, but deliberate abuse by staff is endemic to congregate settings. When we isolate people with disabilities in segregated settings, then give service providers total control over every aspect of our lives, we are facilitating abuse and neglect.

We must do better for all people with disabilities. We must finish closing the institutions that still exist across the country. We must end the use of aversives, restraint and seclusion, and abusive “therapies” across the board, and we must make meaningful, robust community living services a reality in every state. We must hold accountable the systems that allowed the Judge Rotenberg Center to torture with impunity, and ensure that violence against people with disabilities is recognized as violence even when it is done “for our own good.” The Judge Rotenberg Center itself, which has demonstrated an unyielding ideological commitment to torturing people with disabilities, must be shut down, and the survivors must finally be supported to live safe, self-determined lives in their communities.

The release of the ban on electric shock devices is a hard-won victory and a testament to the power of disability advocacy. It is also just one of many necessary changes, and it comes decades too late. We have been forced to spend years debating whether people with intellectual and developmental disabilities feel pain like everyone else; whether our disabilities disqualify us from having human rights; and whether we deserve to live free from fear and abuse. The next changes can’t come fast enough.

The Autistic Self Advocacy Network is a 501(c)(3) nonprofit organization run by and for autistic people. ASAN was created to serve as a national grassroots disability rights organization for the autistic community run by and for autistic Americans, advocating for systems change and ensuring that the voices of autistic people are heard in policy debates and the halls of power. Our staff work to educate communities, support self-advocacy in all its forms, and improve public perceptions of autism. ASAN’s members and supporters include autistic adults and youth, cross-disability advocates, and non-autistic family members, professionals, educators, and friends.